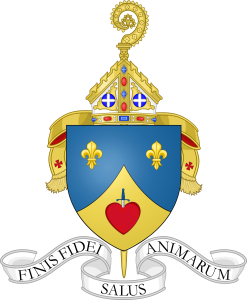 Abbot Hugh Allan’s Coat of Arms were gifted to him by the Falkland Islanders and granted by the College of Arms in July 2019.

The gold fleur-de-lis on a blue shield are derived from the Premonstratensian coat of arms, the order to which Abbot Hugh belongs.

The Immaculate Heart of Mary unites all the islands in the South Atlantic, which are all under her loving protection as Our Lady, Star of the Sea. Abbot Hugh’s Priory is also dedicated to Our Lady of Sorrows.

Abbot Hugh’s motto finis fidei salus animarum translates as The End of Faith is the Salvation of Souls and comes from 1 Peter 1.9.